As i've only seen our Charlie (9yr male, american genes i think) i was wondering how big/small a puppy is assuming I get one at 7-9 weeks.
I've seen the pics people have posted here and they do look small but would one fit in your hand or two hands put together?

perhaps i'm getting a bit excited!

I think it varies a fair bit. Both of mine have been little puppies, and Bramble certainly fit in one of my bf's hands when we got her! Peerie was a little bit bigger, and was about the size of my foot when she came home (I'm only a size 4 tho!).

Both Peerie and Bramble had brothers in the same litter who were MUCH bigger than they were. (I think that the biggest of Bramble's brothers was pretty much double the size of her at 8 weeks!) 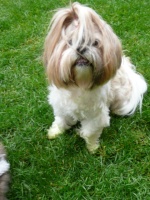 Puppy sizes do vary like they do when they are born, mine tend to be bigger as by 6 months they are fully grown, so the 3 litters I have had have been very much the same.
Also the lines that they come from can also decide in what they weigh, some have good bone some dont and are a little finer.
I look for a nicley covered puppy not to fat or to thin,

Do you have an example of a nicely covered puppy?

Well, for all Bramble's a tiddler, she's a good chunky tiddler if that makes sense! Basically, I look for a happy puppy that's got plenty of energy and is nice and confident. You don't want a really fat little barrel, but you don't want to be feeling all their bones either! (and it really is about feeling them, because puppy fluff can cover a multitude of sins!)

this getting a puppy business requires a little more thought than i thought!

Is there like a shih tzu puppy crib sheet for things to check apart from seeing it with its mother/parents?

You dont want a puppy that is scared within its own home or is affraid of it breeder. Nor if the parents are aggressive in aany way.
You would want a puppy to be happy, clean with good covering nice round bellies.
You have seen pictures of Ziggy and the others they get on well.
He is clean and healthy and eats well.
He is not a big puppy but he is a good size for his age, also if anyone comes to our home then he is happy to go upto them.

There is alot to thnik about when looking for a puppy, but a good sign is how the breeder is if there more intrested in money, or if they pay no attention to the puppies of if your gut tells you then I would leaved without a puppy

excellent! thanks very much Maggie!

No problem Simon, anything we can do I am sure we are all willing to help,

I think Maggie has just about covered it all

) so I would also look to make sure they are happy to be handled.

The puppies may be asleep when you see them but when awake a healthy, well-balanced puppy will be alert, nosy and mischievous.

If you are looking for a good specimen of the breed too then you would want a nice round domed head, with dark round eyes with a bit of space between them and nicely placed, folded down triangular ears, black nose with open nostrils (some babies when teething get pinched nostrils but over-narrow nostrils could lead to breathing problems)... the tail might not yet be over the back but it should look as if it is heading that way. The nose should not be over short, but you would want one that is not too long and there should be a definite stop (an angle where the nose meets the head) and a nice broad square jaw either meeting perfectly or the lower jaw slightly out from the the top)
All depends what you are looking for