Saying goodbye to my best friends

Saying goodbye to my best friends

I am aware this site is for the fantastic shihtzu breed. I hope I am OK? to post this here. Please be assured that little Tucker is doing just fine, apart from a little confused, the poor thing. About eight months ago I lost one one my old basset hounds due to prolonged seizures that just just seemed to come on with old age one day, this left myself and partner distraught and we have continued to think of her daily. Then early hours of Friday morning we lost the other old basset hound girl through gastric torsion. To loose two in one year has definitely been most difficult.
Little Tucker is looking somewhat confused as to where his girlie friends have both gone. I have tried to continue with his normal routine as much as possible, I do today however feel rather guilty as Ive not managed his walk today and although he doesn't seem too fussed about it, I however feel as if its just been a bit too much stress and upset to go through lately.
Tucker does love his daily walk, at the moment he loves running in the grass on the green and he gets very wet and muddy. I intend to get back on schedule tomorrow and give him his pre-Christmas shower. He loves all the attention and pampering which surprises me as he seems so happy running in the wet grass and getting in a muddy mess. I do clean him off and towel dry him after his walks, which he doesn't seem to mind either. Ive made great progress with Tucker, he doesn't bark like he used to anymore, consistent reward training is working very well. His recall is good, he walks to heel on a lead, sits at the curb before crossing the road, waits for me to say when he may eat his breakfast and tea. Hes a pleasure, I can see now that I have just him, how much more we can probably achieve. He is still not overly keen on being left if i go out. but im still working on that, he gets toys and a bone treat when i pop out quickly, im hoping he will eventually associate spending some time by himself as a good thing when gets all these toys and treats to keep him busy. I have also been getting him to spend some time in a different room during the day on and off so he gets more and more used to the idea that being by himself isnt such a bad thing. I would ideally like him to be able to be left for a couple of hours a week without him getting stressed. Im sure we will get there in the end. If anyone has any additional tips that would great. (I also leave the radio on for him) 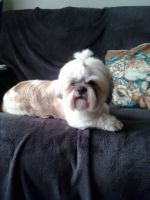 So sorry to hear about the loss of your lovely Bassett Hounds - I have lost dogs in quick succession and I know how devastating this is. To lose one is very hard to lose another is unbearable.
I am sure Tucker understands what you are going through and is happy to just be with you.

I think you have done a tremendous job with Tucker. I am so sorry for the loss of your two Basset hounds girls. And hope you will be able to think of all the happy times you had with them. And I am sure Tucker is feeling the loss too. A kong toy is an excelllent idea to keep him occupied. We also put a radio on for Mali & Tasha if we do have to leave them, which helps. Ours almost always go in the car with us but definately not this time of the year in case someone takes a liking to them and think they would make a nice christmas present for someone. Mind you they don't know these two they may change their minds if they did!!!

Similar topics
» Your friends
» I've got friends....
» A brilliant week at Big Pedro's (Motorhome Friends
» Nothing can separate you from the love of God
» Smiley (taken from Girlfriends in God e-newsletter