Just like to introduce myself, my name is Arne and we have a 2½ year old "Percy".

We got him six months ago from a family where he wasn't needed any more, sadly we were told nothing of his history, not even his birthday. He had been chipped but never had it registered, they also wouldn't tell us the name of the vet, all a bit sad.

The first two weeks in his new home were very hard, barking at everything, walks were awful, he clearly had decided he was going to be top dog and we all worked hard to sort that out, walking through doors first, not allowing on laps, beds etc. it worked and he is much better.

He wasn't very socialised with other dogs, but each evening there is a group at the local park and he has learned to socialise very well, however he is the most vocal, but that is just him

When left alone, once he has realised what has happened, he cries with the most haunting sound, it is quite disturbing to hear. Good thing is it stops after about 30 seconds, and he then accepts that he is on his own.

However he has a dark streak in him, he can bite for no apparent reason, in the six months there have been three what I would call serious incidents, lady at the park who had given him a treat, my son who leaned over me while Percy was on my lap, and lastly my wife while she was stroking him.
First one was related to food.
Second, well he shouldn't have been on my lap.
But the last while being stroked has us baffled.

My wife wanted us to get rid of him after he bit her, but has now forgiven him but is very wary of him. The last bite was after some upheaval at home as we were having a new kitchen installed and the fitter was an Elvis impersonator, A fridge/freezer was parked where his bed used to be and all normality was gone form the household, so perhaps it was down to this going on that he took his frustrations on my wife.

Anyway, her are some pictures of Percy, hope you like him. 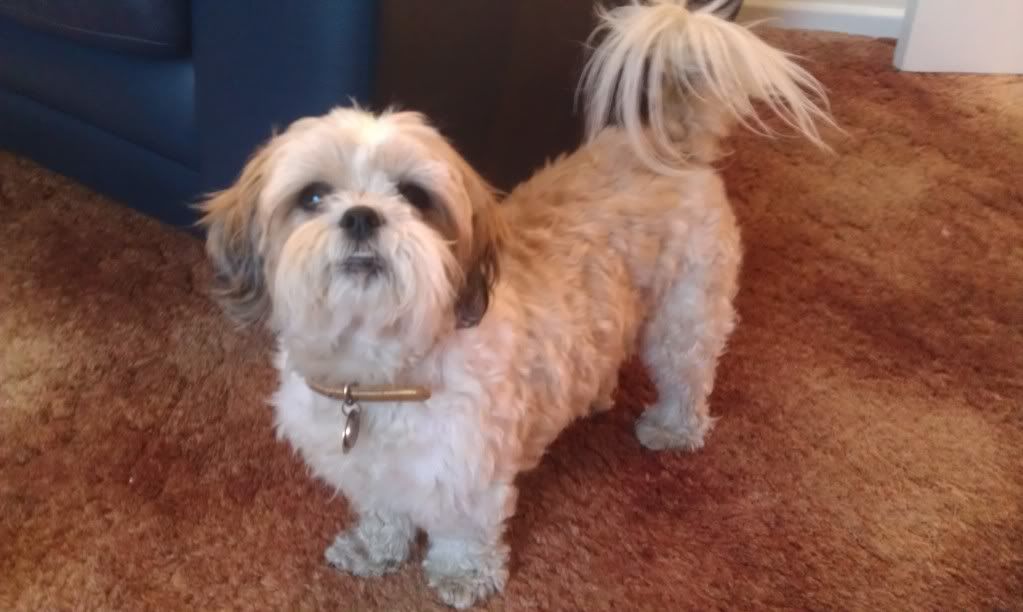 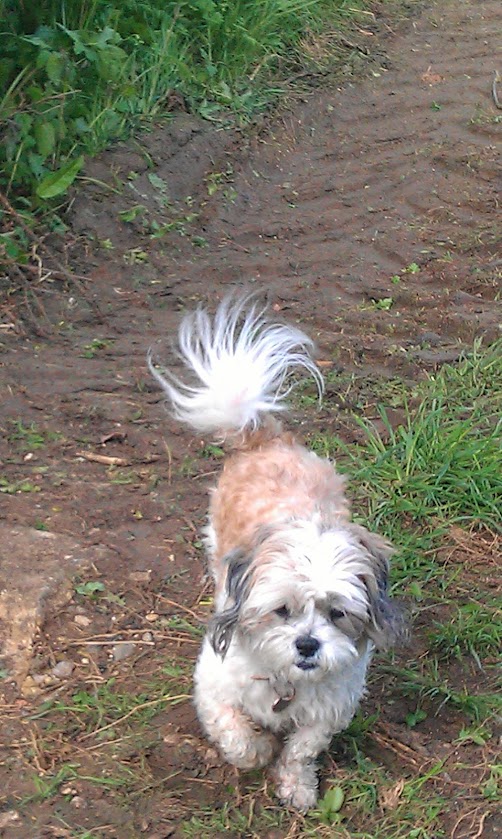 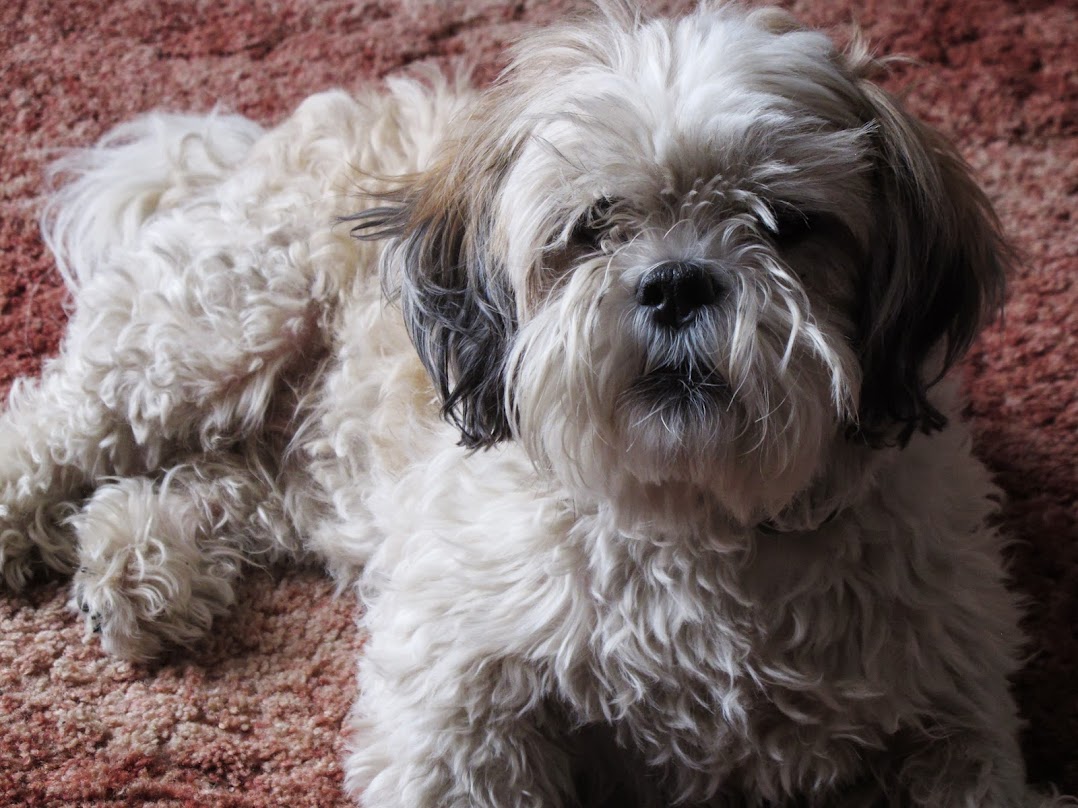 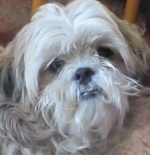 Hi Arne, your family, and Percy and welcome to the forum, it's great to have you here.

All I can say is well done on taking poor little Percy on, he has obviously had a really rough start in life, but hopefully you will help him get over that and realise that not all people are going to be cruel to him. For the previous owners to not be prepared to give you any details of him is horrible, but from your photos it looks like he is settling in nicely with you and your family.

You have done everything right with regard to him thinking he is top dog, it sounds like he was able to set the rules in his old home, but with patience and gentle handling he has learnt a few ground rules which is perfect. From what you have said with regard to the biting I think stress may be causing some of the problems, especially with your wife. Everything was in different places and the place he felt safe had been moved and a big tall freezer taken it's place. Having a new kitchen installed is bad enough for us and we know what is happening, think what it must have felt like for a poor frightened little dog.

It also sounds a similar situation with your son. If Percy thinks he is top dog then your son suddenly appearing over you probably made him think he needed to be shown the this was his place to sit and your son had no right being there. You don't say how old your son is, but I would start to let Percy know that he comes further down the pack by possibly letting your son give Percy his food if he is old enough.

It is going to take time for Percy to completely settle, but you are doing everything right at the minute and I am sure in time he will be the perfect addition to your family. Others will be along later to help, but if you have any questions please don't hesitate to ask, and we will do all we can to help Percy become the lovely little well behaved fur baby that he can. Once you get things sorted I am sure that Percy and your son will be inseparable, shih tzu have a way of worming themselves into your heart and have the most amazing characters with plenty of fun and mischief inside of them!

Thank you for your welcome.
Yes we were surprised about the previous owners. When we were leaving with Percy in my arms, the lady said "I would like to say I'll miss you, but I wont." I just told him "Don't worry mate, we will look after you in your new home".
Regarding my son, he is 30. We will get him to feed Percy next time he comes over.

Hi Arne and welcome to you and yours.  Thank you for taking on this little man. I can't believe that there are people who have these babies and don't become absolutely besotted with them let alone treat them kindly.  I have just taken on a beautiful little rescue bitch and I can only guess what has gone on with her but she is starting to realise she doesn't get smacked in my home!
I don't believe Percy is trying to be top dog or that he has been in his previous home.  It sounds to me that he bites from perceived fear. The lady giving him the treat may well have moved a bit suddenly.  Leaning over you and him would be a threat to him in dog language and the upheaval of a new kitchen would be enough of a disruption to set him off.  I don't have any magic answers I am afraid as I have one here who is the same and he has been with me since he was 8 weeks old but I did have a mishap getting him out of the car which was the first time he bit me and has left him wary. He gets things into his head when there is no reason to and usually happen when I have moved a little fast or he reacts to the tone of my voice sometimes when I am talking to one of the other dogs. Six months is quite a short time in his rehabilitation. Is he neutered? Does he growl a warning first?
With regard to the chip have you got him registered in your name now?  Also have you taken him to any training classes and if so have you had a chat with the trainer about how to deal with him?
_________________

Thank you Simbalove.
The lady in the park was crouching down and gave him a treat then patted or stroked him, there were no warning signs before he bit her finger. She went into shock which made the situation even worse, flip side was that she passed her driving test the next day and put it down to Percy taking her mind off the test.

Good to know we are not alone, we all now have to be wary and spot any signs he is grouchy. Trouble is every lady or child who meet him fall in love with him and want to fuss him, we always say it's not advised.

Re the chip, Our vet scanned him and gave me the number, I went online and searched, when I found which company had provided the chip, I then asked them to transfer it to me and they replied that the chip had never been registered, so it was then easy to register him in my name.

No we haven't gone to training classes, but we have decided to do that next.

We will never know what happened in his earlier life, all we can do is our best for him, we are all he has got.

Okay that sort of explains it then another looming over and the movement toward the head. Definitely get booked into a training class preferably one running the kennel club good citizen scheme as they work on manners and with the family and also will give him some good experience of human socialisation in a controlled environment.
The most important thing for you is to stay positive and calm with him as he will pick up on your concerns and this can escalate the problem.
When you meet people who want to fuss him explain he is a rescue dog and has had bad experiences. Get him to sit or lie and ask them not to make eye contact or reach out to him but allow the back of their hand to droop down near him to give him the chance to sniff and investigate. This might be as far as it goes on a first meeting but with time he will learn to trust again.  Never instigate  cuddles and affection it always needs to start with him. He will come round for them and when he does he will want the touch so is less likely to snap. The best way to stroke him is when he is comfortable alongside you and you can stroke his shoulder and neck from the side with both of you facing the same way and no movement in front of him which is confrontational .I would avoid stroking or patting the head. Some dogs don't like their head being touched and patting can be uncomfortable for them and the movement misconstrued.
If your wife doesn't feed him it would be good for her to do so and if she already does she should build some training into it getting him to sit and wait for it.
Meant to say above if he does sniff someone's hand or shows positive behaviour reward him vocally and if you want to treat him you be the one to give it to him. Percy might benefit from some clicker training while you are sorting out a class for him.  There is a section i have put on here for that purpose.  If you go to the homepage there is a quick link in one of the headings in the menu x
_________________

Hello Arne and welcome to Whispers from me and my two girls Mali and Tasha.  They are a fabulous breed and I hope it won't be long before Percy gets to realise he is in a far better place than where he has been before. I think he looks beautiful 'a butter wouldn't melt' sort of expression.

Hi and welcome from us too, is lovely that you have taken on Percy and have given him a loving home, his photos are lovely, I am sure that in time he will learn to trust again x