cant believe i'm writing this, but sadly last night our beloved Jackson passed away. We adopted him when he was about 18mths. Just over 2yrs ago. He was very grumpy yesterday, wouldnt let me near him, and didnt want the other dogs near him either.
It was very warm last night, and he was restless, and panting, but so were the others so didnt think anything of it.

He went to sleep in our room then wanted out, so he had the run of the house, no sickness or tummy upset just moaning now and again.

This morning about 6.15 i was woken by one of the dogs barking. i couldnt fing Jackson anywhere, called him but no response. started to panic, then to my horror the other dogs showed me where he was stretched out behind the table. I bent down and knew straight away that he was not breathing, called my son as John is away at the moment, he confirmed that Jackson was dead. I cant begin to tell you how I felt, and still feel, i keep wandering round but not knowing what to do. He is now at the vets awaiting a private cremation so we can have his ashes back. It was the worst thing i have ever had to do. I couldnt tell john our son did it for me,as Jackson was his dog.

I will never get over seeing him lying there so still. All the other dogs have been so quiet today, mostly sleeping, must be doggy grief!!

Rest in peace little Jackson, we will miss you so much, especially your unusual bark

so sorry to hear of your loss

Badger wrote:so sorry to hear of your loss

That is just so awful. Does the Vet have any idea what might have happened or would they need to have a Post Mortem done? It is very hard to come to that sort of loss especially if there were no signs to speak of before hand. Run free at Rainbow Bridge.

So sorry to hear about Jackson, best wishes to you all x

I havnt seen a vet, the nurse took him from me and spoke with me for a while, but no mention of a post mortem.
Thank you for your well wishes x

sorry to hear of your sad news

Oh how awful so sorry to hear this it must have been such a shock for you, 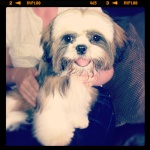 yes it was he wasnt an ill dog apart from a heart murmour! I cant get the picture out of my head!!! seeing him just lying there!!!! it was horrible, poor Jackson, the house is so quiet without him, even though we have the others he had such a distinctive bark!!!!!!! Dont think I will ever get over this x

I am so sorry, that is a terrible thing to happen and although I have never lost a dog I can imagine how grief stricken you must be feeling right now

Sorry to hear about poor Jackson. You must all be devastated. Losing a pet is the hardest thing we ever have to go through as pet owners, but it must have been such a shock as it was unexpected. Just take things one day at a time, and it will very gradually get better, but you will never forget him.

Your other dogs must be feeling it as well, so give them all a hug from me, and also a big hug for you as well.

So sorry, you must be devestated.

Hi thank you, its a week today that Jackson went to the rainbow bridge and its still very raw.
The dogs have been very quiet and slept alot, especially his best friend Charlie.
We let Charlie sleep in our room for a few nights to help him, but yes you are right they have been grieving for Jackson.

We should get his ashes this week, not really looking forward to that, but its what John wanted x

Thinking of you today, hope you manage to get through it without too many tears. We all know how you are feeling, so you are not alone.

Thank you thats a good idea, I will let them sniff the ashes, we will all say goodbye together! The local printers that we use are doing us a photo of Jackson, sophie is in the background, so they are going to remove her, so it will just be Jackson on his own, they are doing it free of charge thats nice isnt it xx

aww thats nice of them especially in this day and age

Sending you all a big hug

So sorry to hear of your loss