Maybe I have found a Tzu!!!

Maybe I have found a Tzu!!!

Hello everyone, hope you have all had a great Christmas!
I am still keeping an eye out for a little one to be a companion and to come to work with me at the Post Office,
I had kind of expected to get a puppy, and a girl, and as you do I have been looking through all the puppy for sale ad's for quite some time as I can't get my baby until we move house.
While I was looking I came across a picture of a little white coloured boy currently in a rescue, he looked so sweet and I had a serious think about maybe giving a home to an adult instead of a puppy.... I phoned the number and spoke to a very nice lady who told me about him.
He is only 18 months old, and had clearly been well looked after at some point because he is vaccinated, neutered, and micro-chipped.
He was given away by owners who 'no longer had time' to look after him -but the rescue felt that this could be due to him no longer being a puppy, and the fact that they 'wanted to go on holiday' and had 'no where to put him'
It is so sad given the rescue says he is a fine happy little Tzu who loves everyone and is getting on great with his foster family......They groomed him and he was fine, and he plays with their dogs and gets on well with cats too.
He is currently with a rescue called, believe it or not POODLES IN NEED, but they also take in other small dogs. If you go on to their web site, go to available dogs, and scroll down you can see him.
I don't know if I will get him for certain, but I am in the process of applying so fingers crossed for this little boy!

and yay for adopting a tzu in need

i have my fingers crossed for you 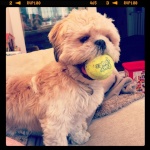 Thank you for your support - I hope that he will be suitable for me, but it sounds hopeful. Obviously he will have to adjust to being in the Post Office but it isn't that busy and he will have his own area to feel safe in as we have an enclosed counter area where I can put his bed.
I have yet to meet him and see if we get on, but on the plus side he may be less work than a puppy, and we can have fun right away!

He looks adorable Heather. I think you may be right in as much as he should less work than a puppy although there will be adjustments on both sides as he will have yet another home to settle into. Shih Tzu's are very loving and will give as much back as they are given and are extremely loyal. I think it is good that he will go to the Post office with you.Hopefully the process of getting him won't be too long.

he is a lovely looking boy.how could anyone not want him.fingers crossed you end up with him.

Any news? Really hope he's right for you

Hi he looks lovely, wouldnt it be lovely if he comes to live with you. Im sure he would love all the fuss he will receive at the post office, people cant resist making a fuss of s shih tzu. good luck x

He looks a lovely little boy, fingers crossed he comes to live with you. At about 18months old he is just about to reach maturity, so should start to settle down. He would be ideal for your Post Office and I am sure that he will soon be friends with all the customers as Shih Tzu love people. Fingers crossed you all get on, when you finally get to meet him.

Well done on taking on a rescue as well.

He looks lovely and I really hope he will get his forever home with you!

I rand the lady back today as she said she was going to e.mail me the application for him and nothing had arrived for two days.......

I thought that there might have been a problem or that he might be gone but no, she was just very busy and says she will do it tonight, I am really exited about him but at the same time I am trying not to get my hopes up too much just in case. I keep wondering what he will be like, I don't even know his name (I didn't want to sound too pushy so I didn't ask)
I believe that dogs have a wonderful capacity to forgive once they find love again...........I will keep you posted as soon as I know more!

He is beautiful, he looks just like my Charlie, but for your sake I hope he isn't, he is a little monster LOL

If he is a typical shiddie, he will return any love you show him a million times over. They are the most loving, loyal dogs, and once he settles with you he will make you so happy. I have my fingers crossed he can come and live with you, it all sounds good so far.

They said it would be sent out by e.mail yesterday after I chased them,
I will ring again tomorrow....On a more positive note we move into our new home on Tuesday!! Yay! We are moving to Thetford and have a lovely home with a big garden. It is a little more rural than I remembered when we first saw it...cows peering out from the barn across the road and just as many tractors as cars. The forest there is vast. I have until the 13th of Feb before I start work again so I was hoping to have a bit of one-to-one time with my new friend before then.............

Sorry you haven't heard from the rescue people yet. Maybe there have been people off over the new year and things will return to normal now. Also your e-mail provider isn't seeing the application form as junk or spam and deleting it automatically are they? Just a thought.

Your new house sounds idyllic to me. I would love to live in the country, and with a nice forest for walks it sounds ideal for a Shih Tzu or two or three to me!

That sounds fab for you Heather but not the moving bit. I do hope you have some luck with the forms today. Good luck with the move I think living in the country is great.