Hi, i came here not so long ago because i was going to be getting a puppy but i didnt end up getting the puppy because there were a few things that didnt feel right about the breeder. Im back again because i wanted your opinions on a dog ive found that needs a home. She is a shih tzu x pug apparently and she is 3 1/2 yrs old, recently had pups and had to have a cesarian and was spayed at the same time. Just wondered if anyone has known any shih tzu x pugs and what they were like in personality? Also will i still be welcome here if i do get her because shes a cross and not full shih tzu?

Yes you will still be welcome

!! I should think that the personality of a pug cross shih tzu would be quite nice. They were bred alongside each other and the pekes in the Chinese palaces so I daresay there was some mixing of breeds back in thise days and while I don't condone these designer dogs, at least the two breeds are not that dis-similar in construction or size to cause too much of a problem. If you decide to have her then I for one am looking forward to seeing her picture and hearing all about her

I cant wait to see your new little girl. I have suddenly decided I like Pugs as well as Shih Tzu's so can't wait to see a photo of her if you get her ( I hope you do )

Thank you!! Ive been told that this girl is good with other dogs, cats and kids but that shes a bit shy and nervous untill she knows you, im not too worried about that though because i have a dog that was abused and came to us a nervous wreck- shes a different dog now!! Anyway heres a picture of the girl im hoping to get (if pic works!)............... 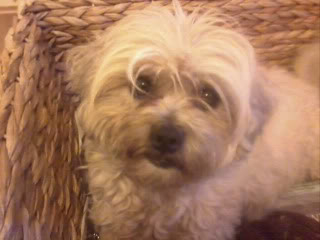 She looks lovely! Good luck with her

She's lovely, hope it all goes well for you.
Sandra

AAhh she looks lovely, keep us posted on how you get on

She looks lovely. I agree with Lesley I can't condone these so called 'designer dogs' either, but I think that probably is a better cross with a Shih Tzu and as far as I know the Pug has a nice temperament.Good luck with her. Do you know why she needs a new home?

Aww she is lovely BUT she doesn't have much PUG there and looks more like a shih tzu crossed with a terrier type or Bichon. Whatever she is she looks adorable and deserves a lovely new mammy

I would have said there is more terrier than pug as well. The nose and eyes look like a westie to me. I should know, I have one lying beside me fast asleep! And the coat looks a bit like a westies as well. She looks like she has found a nice new home to live in though, as long as you take it gently, she should be fine in time.

Yes Sue I thought Westie too - cos she looks very much like my friend's little rescue westie though she seems to have a bit of the shih tzu dome and I am sure she is going to land on her feet with fuzzy who obviously has all the experience needed to take on a poor little mite like this! She certainly looks like a real sweetie from the expression in her eyes and she will be so devoted and loyal once she realises there are loving wonderful homes for little doggies in this world too

Thank you everyone.........but im not getting her now because the lady has changed her mind and has decided she cant bear to let her go :-(. Oh well im on the look out again then!!! 3rd time lucky hopefully?

I am so sorry for you to go through all the excitement of having her and now to be let down again. I don't know what is the matter with these people that cannot make their minds up once and for all. She will probably want you to have her again in a while when hopefully you will at last have your own.

I think ive found a puppy!!!!! A lovely lady has 2 female shih tzus and 1 male and apparently the male got to the female and shes got a litter ready in a few weeks. I know its not perfect (the mum isnt KC reg but the dad is) but she really seems to care for her dogs and when we went to see them she made us wash our hands with alcohol cleanser stuff and answered all our questions. We met mum who was absolutely lovely and really laid back, she gently came to me and had a stroke and sniffed me before going back to her pups. The dad was a big hairy monster!! She said he was clipped but shes growing it back in so she can take him to shows. The puppy we liked is a mixture of dark and white- she said the dark will go really light as he gets older and slightly reddish?? He was a chunky boy and looks like he will have a good coat. Im excited but a bit nervous too because i dont want to get let down again.

Oh I hope you don't get let down again - some of these people should be shot changing their minds like that but this lady seems to be genuine. Are you going to see the pup again? If so take your camera with you. If she will allow you to visit regularly then it will be lovely because you will have formed a lovely bond with your baby and also his family before he comes to live with you and it makes it so much easier for him to move to his new home

Shes already said we can visit every week if we want to. She only lives 5 mins away in the car!! The one weve picked she called the grumpy one- think theyve nicknamed him Victor (as in Victor Meldrew!!) so we might be in for some trouble lol!! Im hoping that means he will just have a lot of character- i just love cheeky little dogs with tonnes of character!!

Oh I do hope this is the one he sounds good. And the lady sounds nice too so let us hope she is a genuine person. When we picked Mali out of a litter of 5 she was the one who came straight up to us tried to pull the laces on hubby's trainers and seemed really inquisitive, the other four pup's were all so not bothered with us at all and stayed sleeping so I had no qualms at all and have never had any regrets choosing Mali. Her coat is very different to most Shih Tzu's it is very straight not at all fluffy like Tasha's and sounds likee your pup's colour dark reddy brown so sounds like a Brindle although Mali or Tasha's coat has stayed the same shade, but they are all different.

Sounds like you have finally found 'The one'. You will know once you see it, and it sounds like this lady really cares. The fact that she is prepared to let you go and see the pup as often as you like is brilliant. As Lesley says, don't forget the camera! If you can go often it will be better for the pup because he will get used to you, and its breeder will become a friend, which means any questions and you can go straight to her. It's so much nicer when people are genuinely interested in their pups, and not just using them as cash dispensers.

He sounds like he is going to be full of mischief as he grows. If you have an idea of a name for him, let the breeder know and she can start using it now, so he gets used to it. We did that with our Westie, and as soon as he came to live with us, he already knew his name which was great. I love the sound of his coat colour, it will be interesting to see how it changes as he grows.

I did the same as Sands when we chose Minty. I sat on the floor and let the pups come to me. Minty came and said hello and then headed straight for my shoes and played tug of war with my laces! Funny thing is, he often pinches my husbands slippers and runs away with them as a game, but never touches any of my shoes!

Fingers crossed you have now found your new fur baby.

Similar topics
» Can you put worms in your compost bin?
» Will this work for compost?
» Second Box Added
» How much compost?
» New Food Kiosks and Menu Items Added