the factory they make it isn't far from us!

We got sent some samples of the shih tzu one, not that we could test it on rupert although we did try with Charlie and he turned his nose up at it! but i was quite surprised how small the kibbles were!

on a side note the word kibble makes me laugh!

I have tried mine on a few with bigger kibble but they wouldn't eat them, i would like to find a food that i could feed them both. With Oscar being a big lad at 10.5kg i'm bit wary about changing him

vet said he is fine and not fat at all.
Sandra

I have ordered some of this from my local pet shop today, to see how
my two get on with it.

Hi Michele,
Just one thing,always get a good sell by date if you are getting especially the bigger bags or lots of buy one get one free.We ended up getting about seven 3kg bags of Mini Junior to last us until Millie is 10 months old.Then we will start Millie on the Shih Tzu one.It's going to be the 7.5kg bag,so that should last about 2 months.

We have also always weighed her food out!Do anyone of you do this!

how much food should you give a puppy if you are weighing it out?

Simbas food always gets measured, but Mintys doesn't because he has always had Burns, and I hope after 7 and a half years of measuring his food twice a day, I can judge how much he should be having! Also Simba is still on the same food the breeder recommended (she said to keep him on it for at least a month, to avoid upset tummies), and he has about half a bag left.

As for how much, it all depends which food you are using, as different foods need different amounts. Some go by the expected adult weight of the dog, and some by the present weight of the dog, so it is hard to say. Also each dogs appetite will vary slightly, so to a point, it is see what they want to eat.

I have a measure for mine both have same amount although Oscar weigh a lot more than Holly, Holly weighs 5.5kg Oscar 10.5kg they never finish each others food , Oscar's weight is'nt even on the chart

All the dry foods (and tins for that matter) will usually state on the product how much you should be feeding per weight of dog. However - this is only a GUIDELINE and should not be taken as set in stone. Some dogs seem not to eat as much as the recommended amount of food, some may eat more - especially if you are changing from one type of food to another when it takes them time to adjust. So I guess what I am saying here is 1) don't panic if your puppy/dog does not eat what it says on the pack and 2) don't refuse your puppy/dog any extra if they seem hungry!! it is a trial and error process to get the amount just right and something that takes a bit of time to settle down (as you need to check the weight of your dog/puppy... not the WEIGHT exactly, the WAY it feels.... if you are feeding correctly you should be able to feel your dog's ribs without having to dig through the flesh for them, but they should have a covering of flesh over them!!

Hi Robert, thanks for the tip I have only ordered a small bag this time
to see how they get on with it, Poppy is only 8 months but the vet
has said it is fine for her to go onto the adult food, I have never weighed
food out for mine either, Wispa eats very little, and Poppy ate loads
up until a few weeks ago but now willleave food in her bowl, I think she
has probably just about stopped growing and doesnt need so much now.

Mine never empty their bowls and Holly eats more than Oscar, we have my sons dogs stopping with us AGAIN one is choc lab and one springer they eat so quick and eat anything they are fed wagg , we thought it might encourage Oscar to eat his but no had couple mouthfuls at tea time then left it, the others soon finished it of and they are really skinny dogs !!
Sandra

Hi I was just reading the link that was put up for royalcanin and I saw in it that the Shih Tzu has a very high rate of atopic skin disorders os Royal Canin Shih Tzu food better at preventing this skin complaint and is that why you all seem to be using it. My other Shih Tzu suffered really badly from atopic skin problems and was on steroids all his life, he even had to have his ear canals closed up as they were so bad so that is why i started Alfie on Burns but from reading about Royal Canin I wonder if this is what he should be on. Has anybody any advice on this as I really don't want to ever have to go down that road again 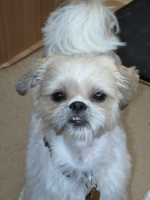 HI Bernie - is Alfie doing OK on the Burns?? Is his skin OK? If the answer to both those questions is yes then I wouldn't worry and keep him on that. Burns is also supposed to be good for dogs with allergies and skin conditions so don't worry. I don't think there is a wrong or right food as long as you are buying from the better end of the pet market. I certainly wouldn't change my dog's food if he is settled on the one I use and is healthy on it and I was happy with it

Thanks for that, yes he is doing ok on the Burns and so far, the skin is fine although I have noticed in the last few days a few little bumps here and there that he is scratching, hopefully it is just something that might have bitten him when in the garden, I am inclined to panic where the skin is concerned having gone through so much with poor Nicky

I took mine off kibble, and was feeding him Royal Canine from the first.
He gets a complete fresh meat diet now and it works wonders on him!

Can't fault it - I have never had a shih tzu with the muscle that Josh has from his raw meat diet!! And rarely do we have tummy troubles and the coat condition and wealth of coat is amazing. I certainly recommend this type of diet

Do you know if I can get BARF in the area of LLandeilo and Beddgelert for my Javari? To take his normal frozen Farmfood an Carnibest raw meat rolls with me for a period of more than two weeks and a total travel time of two days is a bit daunting to me.........

There is a branch of Pets at Home at Bangor and also Carmarthen which stocks Natures Menu which is a BARF diet of raw whole ground meat (frozen) with added veg/rice - here is a link to the Natures Menu site toshow you what it is http://naturesmenu.co.uk/products/Frozen_Nuggets/Frozen_Nuggets/ They also stock frozen mince and frozen meat chunks. If you know the postcode of where you are staying you can put this into the nearest stockist locator on the Natures Menu site and it will give you the names and addresses of other pet shops stocking this in the area... though I would suggest you contact the pet shop in advance and make arrangements for them to have some in. Moast pet shops order from the company even if they don't have the natures menu in so they can get hold of this for you without much problem. Hope this helps you

Lesley you are an angel!

I found out through your website that in LLandeilo where we stay the first week there is a petstore that has Natures menu! I am going to call them so they have everything in stock for me.
For the second week I have to travel 12 miles to the nearest stockist but as the journey won't be that long I can always take some extra with me from Llandeilo

Similar topics
» How does one choose seed that will breed true?
» Royal Dutch Army Museum.
» Do you can w/a specific quantity in mind?
» What is the best bacon pig breed?
» Crossbow Books